Just received an Ipswich Labour “leaflet” through my door.

Very surprising to see that there is no mention at all of the £25 million Ipswich will be getting from the Government as part of the Stronger Town’s Fund. I guess even they found it too hard to try to claim credit for something they strongly dismissed as an “election bribe” and something that would never happen.

However, they did find space in their leaflet to launch a full-frontal attack on me and my record as the Town’s MP. I thought it was only fair for me to respond to their charges one by one.

ORWELL BRIDGE: “Broken his promise”. I think out of all the charges thrown at me this is probably the most comical. Since my election I’ve even been nicknamed by some of my colleagues as “Mr Orwell Bridge” for the amount I’ve gone on about it. I’ve been incredibly robust with Highways England in calling for a solution to the bridge closures. Fortunately, we are now at a point where a new speed limit is being introduced during periods of high wind that should eliminate the need for frequent closures of the bridge.

Some of you may remember that I even held a special debate purely about the Orwell Bridge in Parliament on the matter. Is this something the former Labour MP even contemplated?

After years of chaos associated with Orwell Bridge closures we are about to turn a corner and after years of inaction by Ipswich Labour and their former MP, instead of putting politics aside and acknowledging the work I’ve done, all they can do is pour scorn on me.

Last month I was up on the bridge in the early hours monitoring the works and hope to be up there again in the next few days to see the finished work.

ORTHOPAEDIC SERVICES: “FAILED”. Again, after the Orwell Bridge probably the local issue I’ve been most active on. Like with the Bridge I held a special debate in Parliament to raise my concerns and to oppose the relocation of elective orthopaedic services from Ipswich to Colchester Hospital. I’m disappointed with the outcome and I continue to raise concerns about the merger between Ipswich and Colchester Hospital. When it comes to who fought harder for Ipswich on this issue? Me, my Labour predecessor or the Labour council, I think its pretty clear what the answer is.

The reality is I came to this late in the day after inaction by my Labour predecessor and to a certain extent the decision had already been made. I did what I could, but we got the outcome we got and I’m determined to make the best of it.

I was also very much involved in Ipswich Hospital securing over £5 million in funding from the Government for a new Molecular Laboratory which has helped the Hospital dramatically increase its testing capacity and it will also provide long term benefits such as improved cancer diagnosis.

NORTHERN BYPASS: “QUICKLY GAVE UP”. This is a lie. I haven’t given up. In the short-term my focus has been getting the Orwell Bridge resolved but my long-term focus remains the Northern Bypass. A decision was made not to progress plans due to neighbouring local authorities not being prepared to take on all the additional housing necessary to help fund the project. I’ve challenged this and with the new Freeport in Felixstowe the case for the bypass has only got stronger.

NHS heroes: “REFUSED”. Lies again. I didn’t attend a meeting organised by the local branch of the Trades Union Congress TUC (a Labour Party affiliated organisation) for all key workers due to the abuse and threats I’ve received from some of its members/supporters in the past. The idea that I’ve point blank refused to meet with NHS workers who are constituents is a 100% lie. Throughout the pandemic I’ve written many letters on behalf of constituents who work in the NHS about their pay and conditions. Of course, my door is always open to them.

A-LEVEL RESULTS: “FAILED TO SPEAK OUT”. The truth is that I was on the Education Select Committee which produced a report ahead of last summers exam series warning OFQUAL about the effect that having an algorithm might have on that year’s results. I was outspoken in my views. Another lie.

Interesting that the Labour Party had nothing to say on this whole issue of awarding exam results when you’ve had no exams, until it all went wrong and then “Captain Hindsight” Starmer came to the rescue!

CLOSURE of SCHOOLS IN JANUARY: “HID AWAY”. I have no idea what Ipswich Labour actually mean by this. Other than the fact that I was literally locked away for a week during this time due to having to self-isolate because I’d tested positive for COVID-19.

CHILDREN’S CENTRES: “STAYED SILENT”. Another lie. I issued a statement. The statement largely welcomed the new family hubs and addressed many of the mistruths and scare stories put out by the local Labour Party. I do however continue to monitor developments closely. I must add though, that this year I haven’t, from what I recall, received a single piece of correspondence from a constituent complaining about how the new system is working.

FREE SCHOOL MEALS: “VOTED AGAINST”. I voted against a non-binding motion in Parliament. Eligible children in Ipswich and Suffolk continue to receive free school meals during the holidays. This has been funded by the unprecedented COVID WINTER GRANT SCHEME (£2 million was given to Suffolk).

ALLOCATION of POLICE OFFICERS: “SAID NOTHING”. Ipswich and Suffolk have had increased numbers of police officers benefitting from the Prime Minister’s plan to introduce 25,000 new police officers. I have been a keen advocate calling for the national funding formula to change so that Ipswich gets a much better deal.

EASING LOCKDOWN RESTRICTIONS: “CALLED FOR”. I signed letter calling for lockdown restrictions to be lifted at the end of May. By the rate of progress we are making at the moment, and bearing in mind that at the end of March every over fifty has already been vaccinated, what is problem with that? Think about where we will be in the next two months. Would Ipswich Labour rather us be locked down throughout the summer?

If this diatribe of lies is the best that Ipswich labour can do, then my only conclusion can be that Ipswich deserves better, and quite frankly, bring it on. 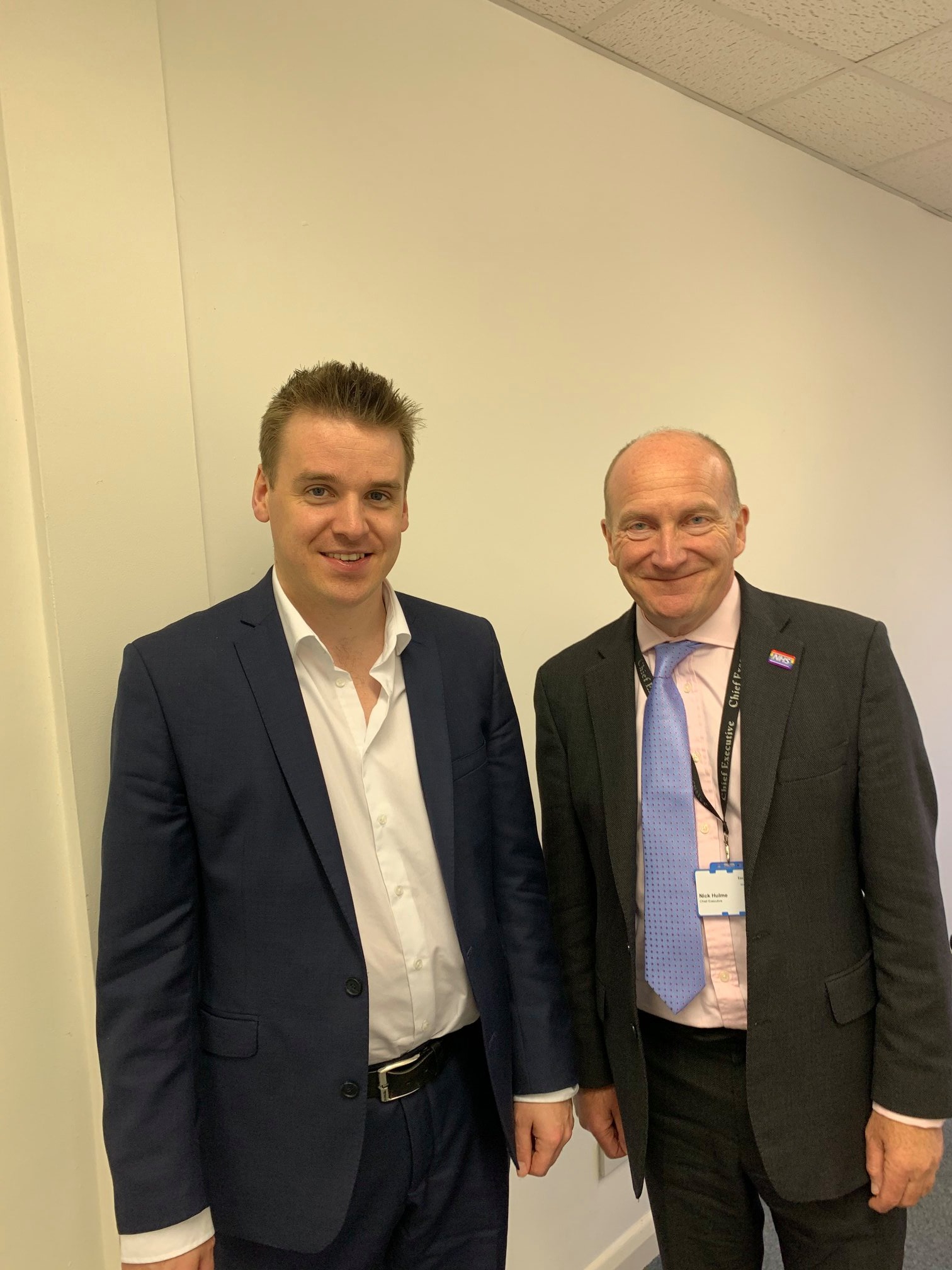 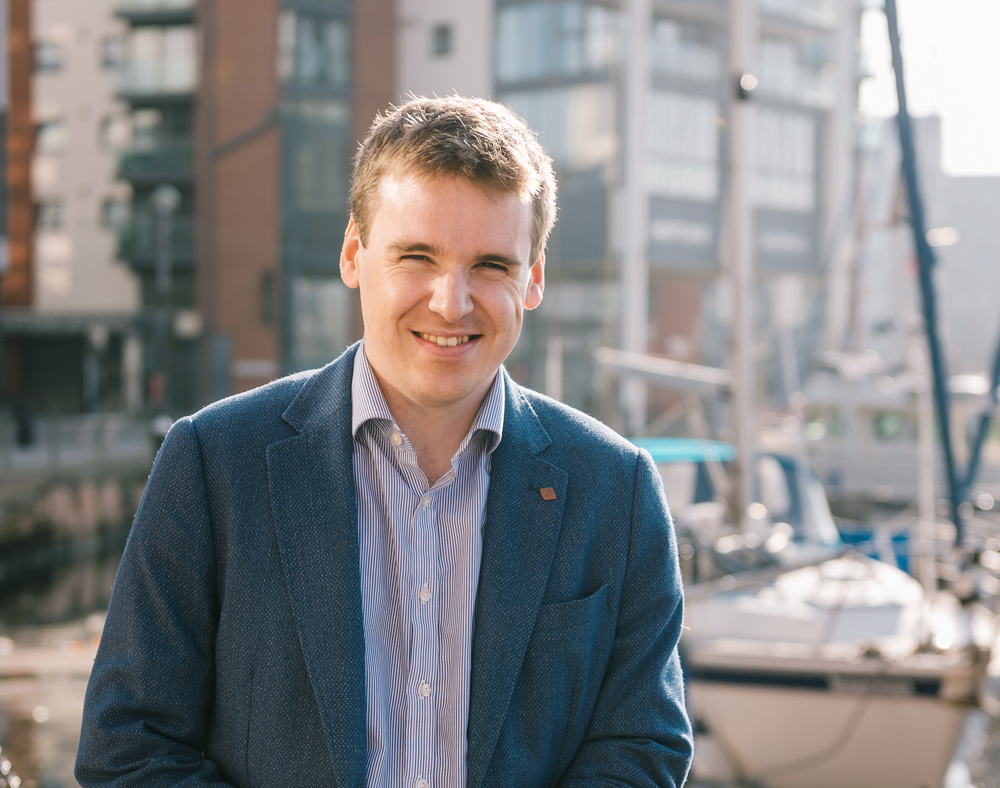 Being accessible as your MP

During my acceptance speech on the morning of the 13th December I said I wanted to be the MP for all the people of Ipswich, whoever they voted for. I believe it’s vital that I am fully accessible as your MP and that if you have a problem that I can help with, you can speak to me about it. So starting on 11th January, I will be holding regular surgeries giving people a chance to raise their concerns and problems directly to me.

However, I am also committed to reaching out to everyone, all across the town and I plan to hold surgeries in the community not only in my constituency office.

I will therefore be holding regular events in libraries and community halls all across the town so I can hear from as many of you as I can. I am committed to being an MP that serves you to the highest standard.

First things first, Happy New Year to everyone in Ipswich! I am hopeful that 2020 can be a year where significant progress is made in tackling issues across the town, making Ipswich an even better place to live. 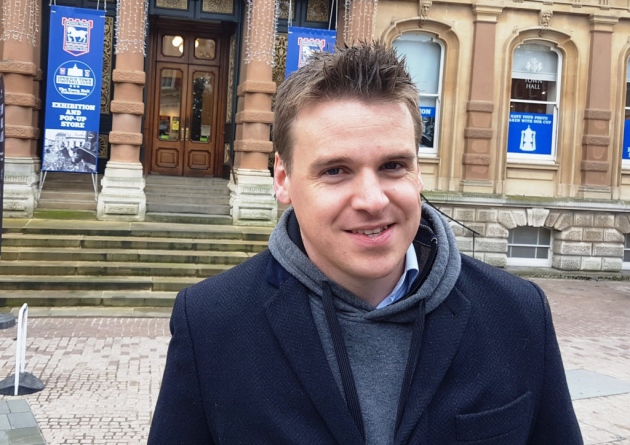 Firstly, I hope everyone had a great Christmas and I wish everyone in Ipswich a happy new year! Ipswich is a great place to be at this time of year, our fantastic pubs are alive with merriment and there are so many carol services it’s been impossible for me to even try and get to everyone. 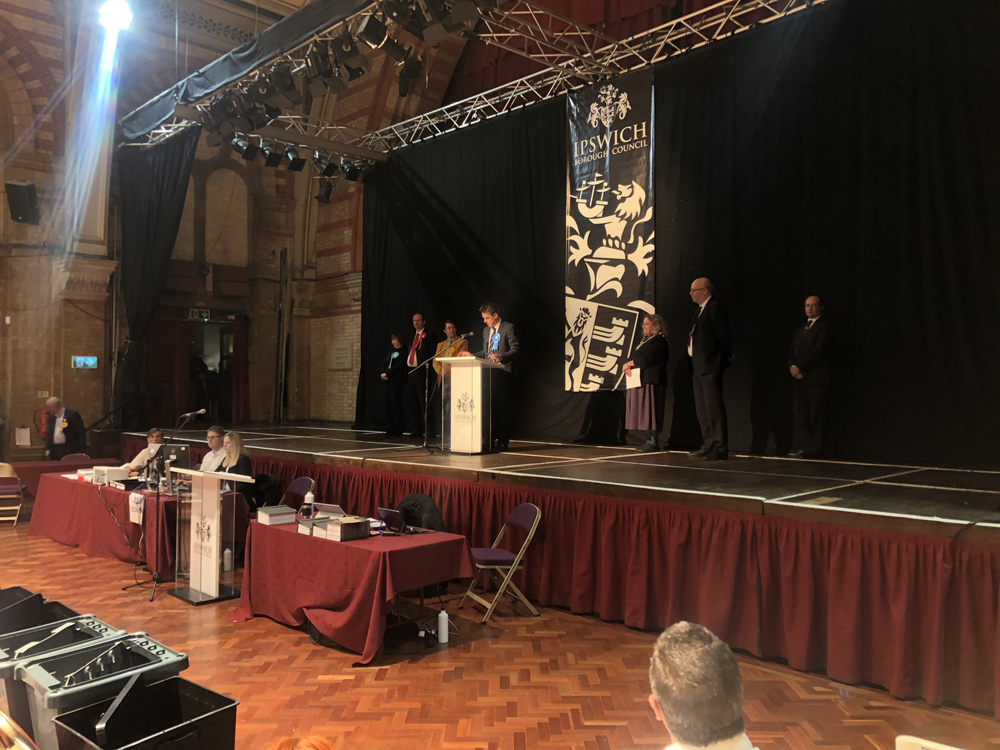 It has been the greatest honour of my life to have been elected as the Member of Parliament for Ipswich in the early hours of Friday morning. The the result here in Ipswich and across the country is a clear indication that the majority of people would like the referendum result to be respected and Brexit to be delivered. There is a huge desire for us to turn a chapter and move on as a country. Once we have left the EU the focus then needs to be on bringing people together and healing the divisions in our country, however difficult this may be. 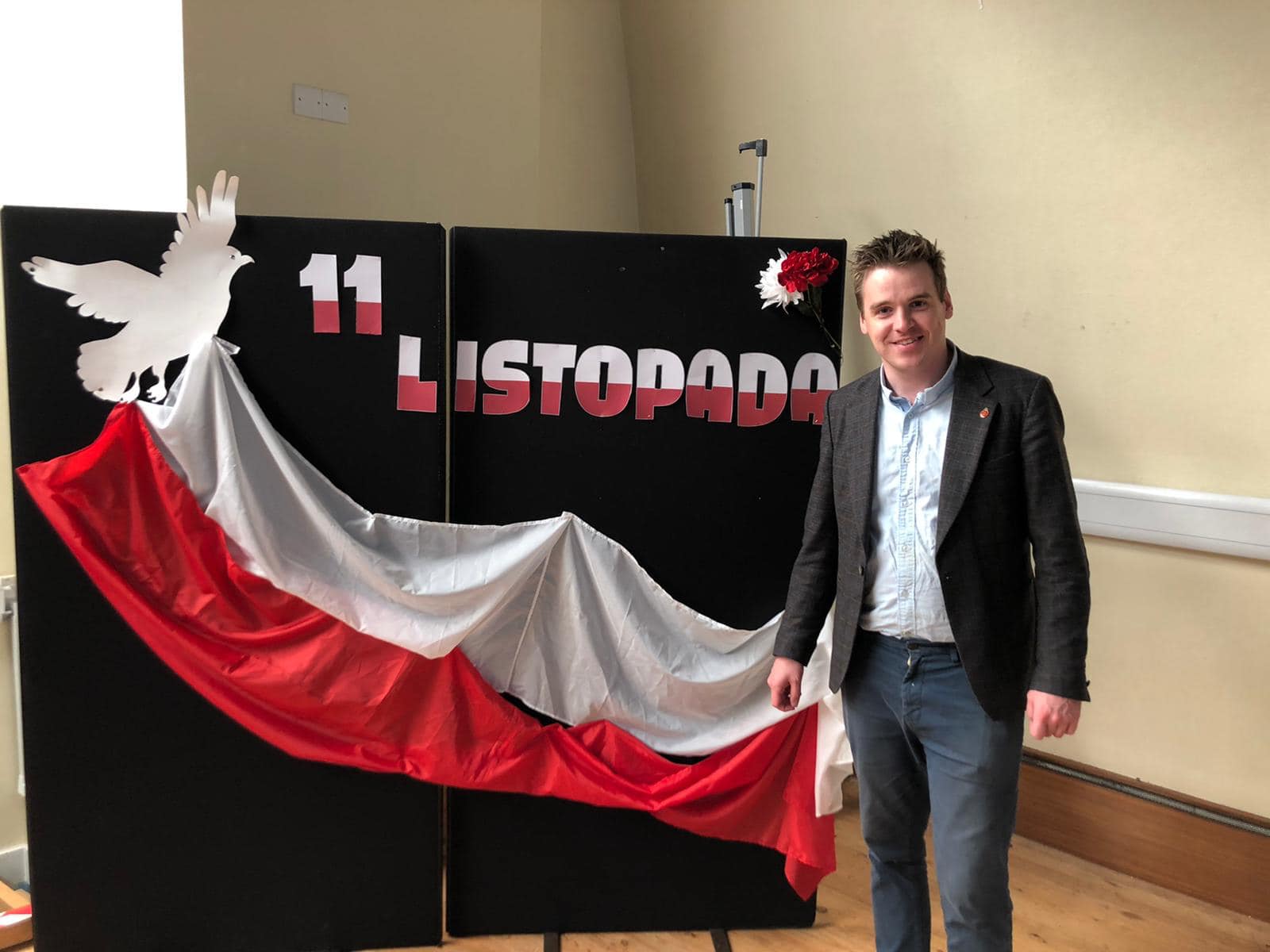 Just got back from celebrating the Polish National day with the Ipswich Polish community. I have always had huge admiration for Poles, the values they hold and the enormous contribution they have made to our country and continue to make. 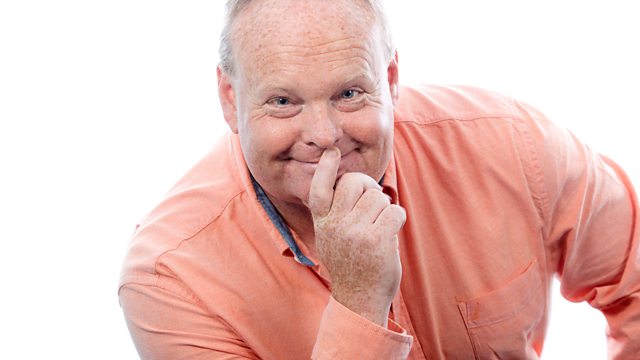 Yesterday I was on Radio Suffolk Mark Murphy show discussing Brexit and Parliament. To listen in on what was discussed tune in at 2:12 – https://www.bbc.co.uk/programmes/p07kf5v8

To read my full statement on the closure of Parliament, click here. 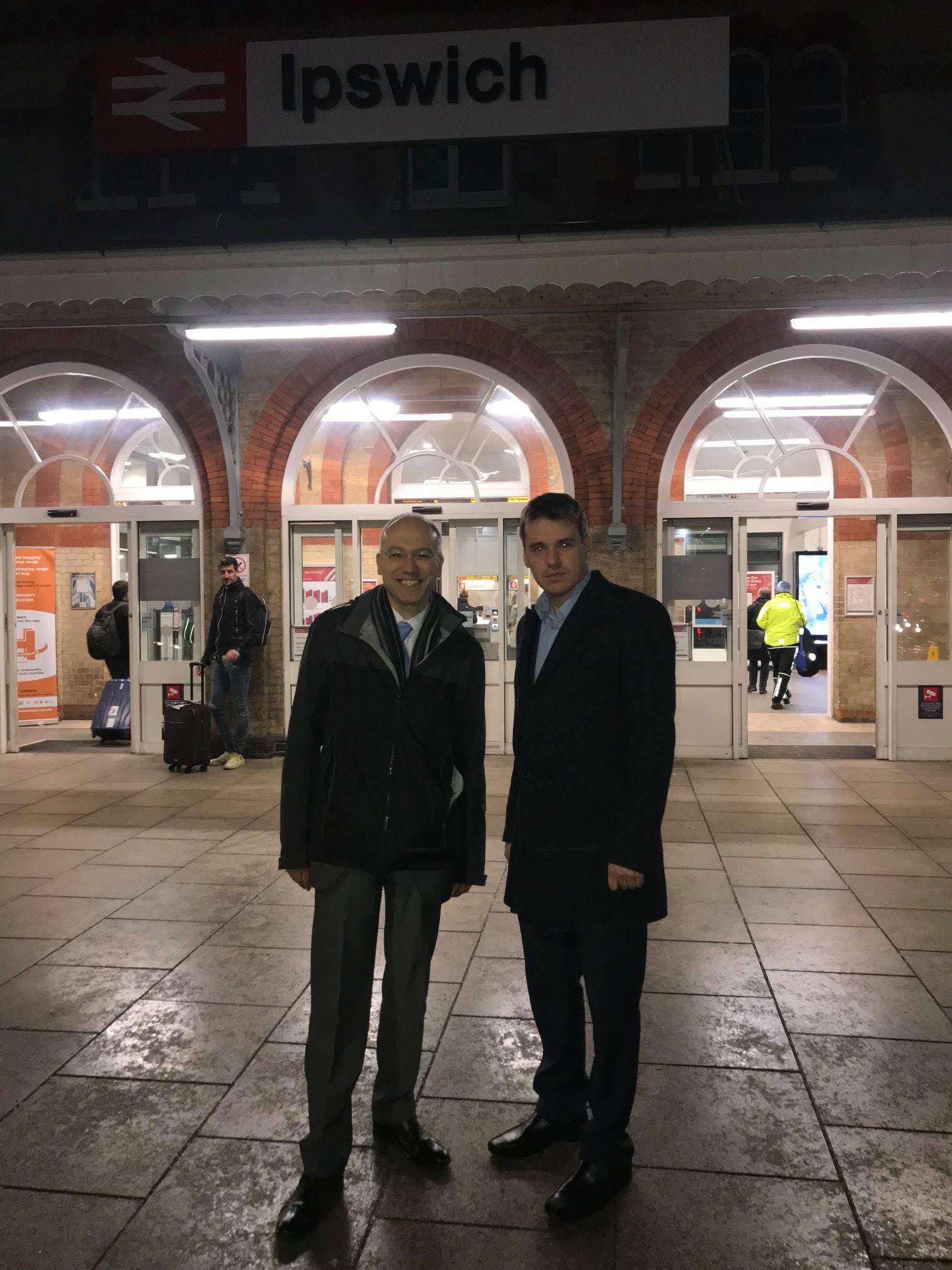 Good meeting with Jonathan Denby from Greater Anglia this afternoon at Ipswich train station. It’s looking likely over the summer they will be rolling out the new trains across the network.

Another busy month. There has been a strong education focus for me over the past four weeks with five visits to secondary schools in Ipswich. At each school I met with the head teacher to discuss the challenges facing their school and what their key concerns are.