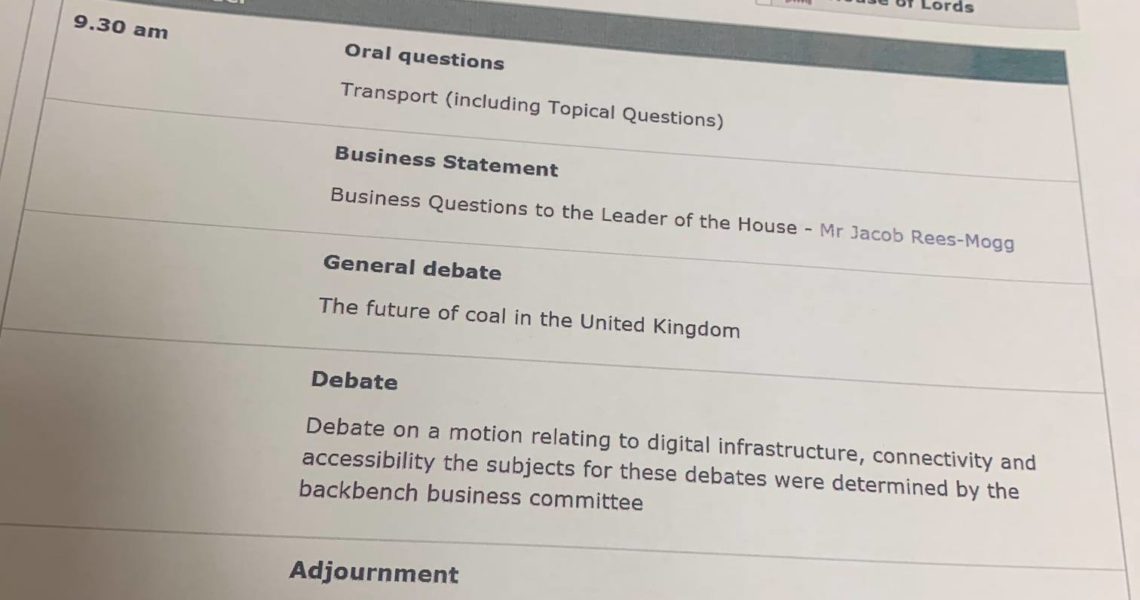 November 26, 2020 0 Comments by Chris in Infrastructure

I was pleased to be notified today that I have secured a special debate in the House of Commons Chamber on closures of the Orwell Bridge. It will take place next Thursday. This is the second time I will have led an adjournment debate since I was elected, the first one was orthopaedic services at Ipswich Hospital.

I hope this time holding the debate leads to a more positive outcome! I’m determined to keep this issue at the top of the agenda until Highways England implement the recommendations from their report and we know that having done so will mean that frequent closures of the bridge are a thing of the past. A Government Transport Minister will be present at the debate.

Used a question during the Spending Review today to welcome new measures like the £4 billion Levelling Up Fund for local infrastructure but also underline to the Chancellor how Ipswich must be very much part of the mix when it comes to this funding, alongside the Midlands and the North. These regions are often spoken about when it comes to levelling up the country but our town deserves to be a big part of this conversation as well.

I also welcomed the increase in the schools budget by £7.1 billion by 2022-23 compared to 2019-20 and the plans to rebuild 500 schools over the next decade are important but we have to be clear that children with SEND must get the benefits of this funding as well. And it was good that in response to me the Chancellor was able to confirm that £300 million has been allocated for new school places for children with SEND which is about 4 times as much than was provided to local authorities a year ago.

More high quality special school places is something I’ve been calling for since my election, and I’ve seen first-hand how these places make a huge difference to youngsters through my involvement as a Governor at the new Sir Bobby Robson school in Ipswich. A further special school on Woodbridge Road in Ipswich is due to open in 2022 for young people with speech and language difficulties which is highly positive. But that being said, I know there are still children in Ipswich who would benefit from a place at a special school but can’t get one and we must go further. And I’ll be looking very closely at how Ipswich can benefit from this increased funding for new places the Chancellor spoke about.

It is the case that special school places to cost more, but it’s the right thing to do and we’ll all benefit as a society if children with SEND are able to achieve their full potential.

Used an urgent question in Parliament today to raise the huge costs being faced by leaseholders at Cardinal Lofts by the Waterfront as a result of the dangerous cladding on their building. I’ve been in close contact with residents of Cardinal Lofts who’ve written to me about how they’ve essentially had a note slipped under their door by the management company telling them they now have to pay almost £400 per month per flat for a waking watch because of the fire risk. This is unacceptable when they weren’t responsible for putting this dangerous cladding up. Clearly the bill should be being slipped under the door of those who are responsible.

This is a huge amount of money and understandably it’s left leaseholders with a cloud of uncertainty hanging over them. Especially as some I’ve spoken to have said their property price has already plummeted and many are under real financial pressure as it is because of Covid-19.

This is a fundamental issue of fairness and I’ve been raising the similar cladding issues affecting St Francis Tower in Parliament since soon after I was elected. But since then more and more buildings in Ipswich have had issues. And I called today on the Housing Minister to meet with me to discuss how we can provide residents at Cardinal Lofts with the certainty leaseholders need and deserve. The Government needs to look very closely at whether we can stop leaseholders being caught in limbo by providing the funding for cladding replacement up front, and pursuing the freeholders responsible for putting it up afterwards.

I’ve also been working with leaseholders at Cardinal Lofts to submit written questions asking the Government to look at direct support for leaseholders with the cost of waking watches and other interim fire safety measures. The Government’s £1 billion Fire Safety Fund does help with cladding replacement costs (although I think it should go further) but it doesn’t cover incidental costs like waking watches before the cladding is removed.

I have meetings scheduled this week with Cardinal Lofts’ management company where I will raise the impersonal way residents have been contacted about these bills they face. And after my question today I’ll also be meeting with the Housing Minister again. I also hope to meet directly some of the leaseholders at Cardinal Lofts who’ve written in to me very shortly.

Whether it’s meetings, questions in Parliament like today, written questions or sending letters directly to Ministers, I’ll use every tool at my disposal to make sure leaseholders don’t have this cloud of uncertainty hanging over them for any longer.

Yesterday I asked the Children’s Minister about the £220 million expansion of the Holiday Activities and Food programme through Easter, Summer and Christmas in 2021. Ipswich was one of the pilots of the programme, and I saw it in action when I visited Inspire Suffolk with the Children’s Minister in the summer. One of the key ways the activities were able to benefit the children was the participation of different local organisations and young people from Ipswich in delivering the pilot. And It’s important that when this programme comes back and is rolled out across the country, that schools, childcare providers, voluntary organisations can all play a role, as the Minister also underlined.

The programme provides meals for children during the school holidays as well as keeping them engaged in activities and exercise. And it’s important it’s rolled out with as much involvement from the community as possible to make the most of it. I’ll be keeping a very close eye on the expansion of the programme next year and I’ll do everything I can locally to help make sure the community is completely aware of how they can get involved.

November 23, 2020 0 Comments by Chris in Uncategorized

Used a question in the House today to welcome the £5.2 million investment in an new Molecular Lab for Ipswich Hospital which will allow our Hospital to keep increasing testing up to 3,000 Covid-19 tests a day by the end of March. (It was actually the Prime Minister who was planned to respond to my question today. But the Health Secretary had to step in at the last minute when his virtual connection to Parliament broke.)

The news of this investment was released to the Hospital on 11 November after I wrote to the Health Secretary on 29 October calling for this new lab to be approved. I had been informed by the Hospital that testing there was at capacity and the lab they were working in wasn’t appropriate for scale of the task, but their bid for this new Molecular Lab was essentially sitting on Ministers’ desks just waiting for final approval.

It’s crucial that Ipswich Hospital is where it needs to be on testing and it’s good we were able to get this investment into the Hospital where it’s needed. These tests will also be turned around in hours, rather than days as was the case at the start of the pandemic when all tests had to be analysed in Cambridge before being returned.

The new lab will also have long-term benefits for Ipswich residents as it will improve services for a wide range of effective diseases and cancer diagnosis.

I also raised the reports that NHS England are looking to use Gainsborough Sports Centre in Ipswich as Suffolk’s first site for delivering vaccinations if and when a vaccine is approved. Increased testing and a safe and effective vaccine represent two crucial ways we can beat Covid-19. And it’s important that Ipswich is at the forefront of both issues for Ipswich residents as we hopefully move ever closer to defeating this virus.

I’ll be monitoring the roll out of any vaccine and increased testing in Ipswich exceptionally closely over the coming weeks and months, raising them at the highest levels and supporting our local NHS. And I’ll be looking very closely at everything the Prime Minister has said today about the restrictions after the end of the national lockdown and what they mean for Ipswich.