Written a piece about the approach I believe we ought to take in tackling the illegal crossings we’ve seen over the past few months. In short, I think we need a more robust approach, one that is prepared to do whatever it takes to get a grip of the situation in the short term. It’s all well and good looking to come to an agreement with France but ultimately if this is not possible we need to be prepared to take the situation into our own hands regardless of international opinion or convention. Australia took a very robust approach and were successful in dealing with a similar challenge.

Our ability to tackle illegal immigration should not be dependent on our ability to strike an agreement with another country. Taking back control of our borders must mean that we are able to deal with this issue by ourselves if necessary. I know a number of you are very concerned about the illegal crossings we’ve seen and I’ve received hundreds of emails and letters on the matter. I share your concerns which is why I’ve published this opinion piece.

I intervened today during an Opposition Day debate called by the SNP calling for an extension of the EU transition period supposedly because of the disruption caused by Covid-19. I pointed out that it’s the same people calling for an extension of the transition period now who were previously fighting tooth and nail to block Brexit after the 2016 referendum. And the use of this Opposition Day to actually rehash the old arguments about Leave and Remain was clearly coming through in the SNP’s arguments.

Just as this might be expected from the SNP, we are also now used to the sound of silence from the Parliamentary Labour Party on whether they support an extension to the transition period. There wasn’t a single Labour MP on the call list to speak in today’s debate and I didn’t spot one backbench Labour MP present in the Chamber, even just to listen to what was said.

And Labour’s abstention on today’s motion leaves the public none the wiser as to where Her Majesty’s Opposition stand on this crucial issue for our country’s future.

We know that the Labour Party in London wants an extension as does the Labour Party in Wales. But the national Party led by Keir Starmer continues to flip flop. I’ve said before that the Leader of the Opposition has a tendency to go to ground on the big issues and sit on the fence, and today was another example of this consistent failure to provide leadership.

BREXIT: I was ticked off by Mr Deputy Speaker today as I used a statement on the UK-EU negotiations to ask the Minister for the Cabinet Office about Keir Starmer’s tendency to go to ground on the big issues, especially the big Brexit-related issues, and how it’s vital that by contrast the Government is resolute in ending the transition period on the 31st December and Freedom of Movement along with it.

My question was quite political and this is what the Deputy Speaker picked me up on. But while I appreciate that Keir Starmer wasn’t there to respond, frankly I felt I had to ask someone about his position given that the Leader of the Opposition doesn’t seem so sure himself.

On a serious note, I think many members of the public are understandably confused about whether Starmer’s Labour Party supports an extension to the transition period. We know that the SNP, the Liberal Democrats and the Greens support an extension and so does the Labour Party in London and Wales, but we are still no clearer to knowing what the position of the Labour front bench is.

This is a case and point of how Starmer consistently ducks big judgement calls on key issues, and when he finally can’t duck them any longer, his message is often muddled and indecisive. This is a world-away from the leadership needed on this issue and it’s vitally important that by contrast we work to retain the public’s confidence by ending the transition period on time, and by delivering on fundamental aspects of the Brexit vote like ending Freedom of Movement.

I am glad that Michael Gove reaffirmed the Government’s complete commitment not to extend the transition period, and I thought his comment that we don’t know if Keir Starmer is the Scarlet Pimpernel or the invisible man was particularly apt.

Earlier today I used an urgent question on the UK-EU negotiations to ask the Cabinet Office Minister about the unacceptable increase in illegal immigration across the English Channel and how we can take a more robust approach after the transition period has ended. Here’s what I said:

“We have recently seen an unacceptable increase in the number of illegal migrants entering this country through unauthorised crossing of the English Channel. Does my Right Honourable Friend agree with me that being tied to EU rules and regulations during the transition period makes the return of illegal migrants more difficult and that this underlines the importance of ending it on the 31st December? And will he assure me and my constituents today, that the UK will rebuff any EU attempt to make a new deal on illegal migration contingent on us conceding in other areas of negotiations? 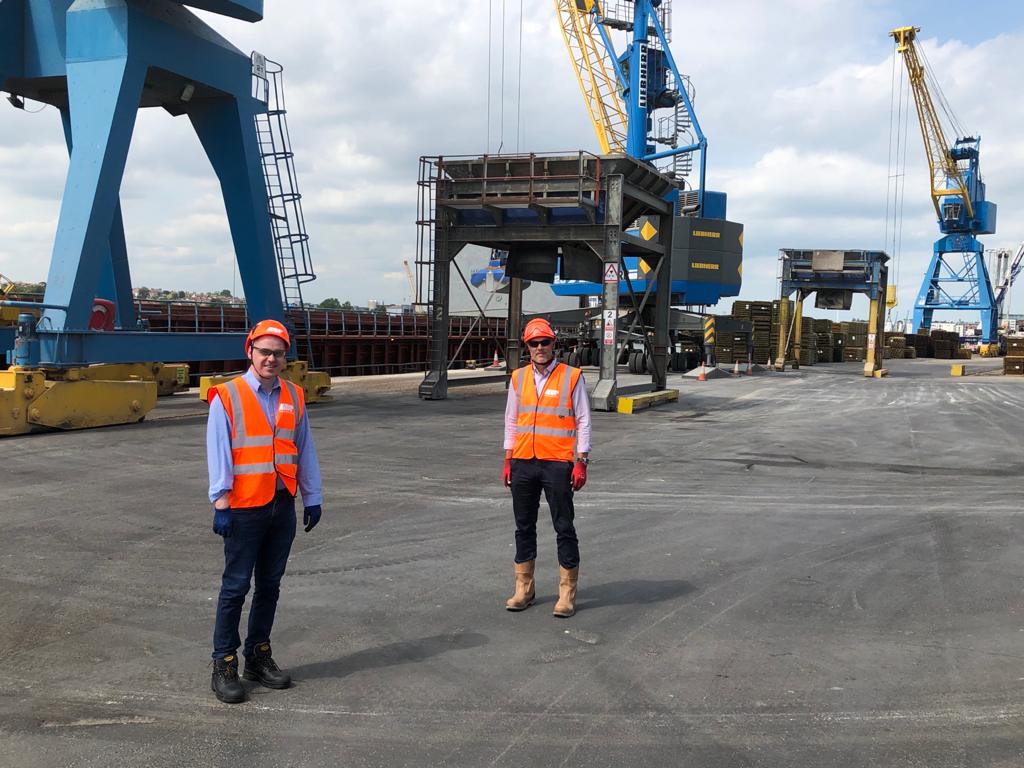 Visit to Port of Ipswich

Really positive visit to the Port of Ipswich this afternoon. Thanks to the amazing efforts of everyone who works at the Port they have actually had a rather busy couple of months. Massive amounts of timber has arrived at the Port due to significant demand and fertiliser has also been arriving in time for the Suffolk harvest. Over the past couple of months around 90 per cent of the key workers at the Port have still been coming into work to keep Britain trading, however clearly they have been working in a different kind of way as a result of the virus.

A significant number of my constituents work at Ports, whether at Felixstowe or Ipswich and I think they all deserve a massive metaphorical pat on the back for the work they have been carrying out over the past couple of months making sure that then when the time comes our local economy and agricultural sector can make positive strides.

Yesterday I made a speech in the House of Commons on the Immigration Bill which will end freedom of movement and allow us to put in place a points-based immigration system instead. Needless to say the Bill has my full support. Ending uncontrolled mass immigration was one of the main reasons why so many people voted to leave the EU in 2016 and I was glad to speak up in support of this yesterday.

We know in Ipswich the immense contributions of many of the people who have come from overseas to make our town their home. And under the new points-based system we will be able to continue to welcome those who love our country and have so much to offer it. Crucially though immigration must have the public’s consent and we must be able to say no to people who may not wish to come here to integrate fully into our society.

It was disappointing to see that the Labour Party voted against the Bill last night, although this perhaps it shouldn’t come as a surprise given they are now led by Keir Starmer who pushed Labour into backing a second referendum last year and then set out his full support for bringing freedom of movement back after Brexit during the Labour leadership contest. Labour continues to show how out-of-touch it has become with millions of working-class people across the country who have legitimate concerns about mass immigration and voted for Brexit specifically because of them.

I also raised illegal immigration during my speech. While not part of this Bill, many constituents have written in about the unprecedented numbers of illegal migrants who have crossed the English Channel recently and this issue must also be tackled if we are to build up public confidence in our borders. More people who break our laws to come here must be deported to uphold the rule of law and deter others. And I’ve called on the Government to introduce tougher measures over the coming weeks.

This afternoon I made clear my view that it’s critical that despite the challenges presented by COVID-19 there is no extension of the EU transition period. I was reassured by the response I received from Michael Gove. “Thank you, Mr Speaker, Over the recent weeks we have seen how the European Union’s response to the unprecedented COVID-19 pandemic has been fraught with internal divisions, as the German Federal Court ruled the European Central Bank overstepped their legitimate competence with its £2 trillion rescue policy. Does my Rt Hon Friend agree with me that it is now even more essential that we press ahead with negotiations and end the transition period by the end of the year, so we can regain complete control of our money, borders and laws, and therefore have the flexibility and nimbleness in this country to chart our own path to recovery from COVID-19?”