The in-tray for the new Prime Minister when they enter Downing Street next week is incredibly daunting – with the cost of living, the war in Ukraine, and supporting the NHS, the list goes on and on.

One issue that is definitely right up there in terms of importance, and one I continue to hear from constituents about, is the small boat crossings. The status quo – where we continue to see thousands upon thousands turning up illegally on our shores – is rightly something the majority of people across the country find intolerable and even infuriating. I know I definitely do.

My record on this issue is what it is. Formally, when you look at the Parliamentary records you’ll have a job finding an MP who has raised the issue as many times as I’ve done. Informally, I’ve lost count of the number of times I’ve impressed upon the Prime Minister, the Home Secretary and whoever else will listen in Government how urgent the need is to get a firm grip on this issue.

However despite the introduction of the Nationality and Borders Bill and the Rwanda scheme we’re still seeing the problem go from bad to worse.

When weighing up who to back as the new leader of the Conservative Party and Prime Minister of this country, this is an issue I put to all of them. It’s one of the reasons why I backed Liz Truss over Rishi Sunak in the final two. Ultimately, bearing in mind the conversations I had with her, I felt she was more likely to grip the issue and do what was necessary.

She was absolutely clear when I spoke to her that leaving the European Convention of Human Rights should be on the table if it’s the only way of solving the issue. I agree with her that this will, more than likely not, be necessary – and it certainly shouldn’t be something we reach for immediately, but it really does need to be an option if we can’t resolve the issue imminently through introducing a new British Bill of Rights. And I mean imminently.

I also agree with her stance that the Rwanda scheme should be extended and deals should be struck with other countries on a similar basis.

I do however agree with Rishi Sunak that there is a case for a narrower definition of who qualifies for asylum in this country than the one offered by the European Convention of Human Rights. I imagine that this is something being seriously considered by Liz Truss also.

Ultimately though, a comprehensive solution can’t wait and time is of the essence.
I continue to be of the view that the majority of those who illegally enter our country via the channel crossing route are economic migrants, not refugees. This was given further credence only weeks ago, with the revelation that almost half of all those arriving on our shores by this route actually come from a single country: Albania.

Now, Albania clearly isn’t as economically advanced as the UK, but fundamentally present-day Albania is a safe European country. It’s even in line for EU membership. And how many other safe European countries have these overwhelmingly young, male migrants journeyed through before they get to our shores?
I completely understand why these individuals may want to move to the UK but ultimately if they wish to come here they should look to do so legally through our visas and immigration system – not arriving here illegally and launching bogus asylum claims.

That we have thus far been unable to decisively bring an end to this farce is incredibly dispiriting and depressing, and I fully share the anger felt by a great many of my constituents.

The cost of accommodation alone, for the thousands of people who are arriving here illegally, is now in the billions. Unless we nip it in the bud now, it will increasingly place pressure on our public services and undermine our ability to accommodate genuine refugees. Enough is enough. The next Prime Minister and Government must put tackling this issue urgently on their priority list.

It goes without saying that unless the Conservative Government makes significant progress on this issue before the next General Election, it will pay a significant price.

It simply isn’t enough for us to go into an election saying it would be even worse with Labour and their likely left-wing coalition partners who tend to be sympathetic to an open borders attitude.

I do note however that my Labour Party opponent at the next General Election seems to take a very different view on this issue than myself. In fact, it appears that in the past he’s made visits to the camps in France where many of the individuals in question are based before seeking illegal entry into our country. Who knows what he was looking to achieve through such a visit. 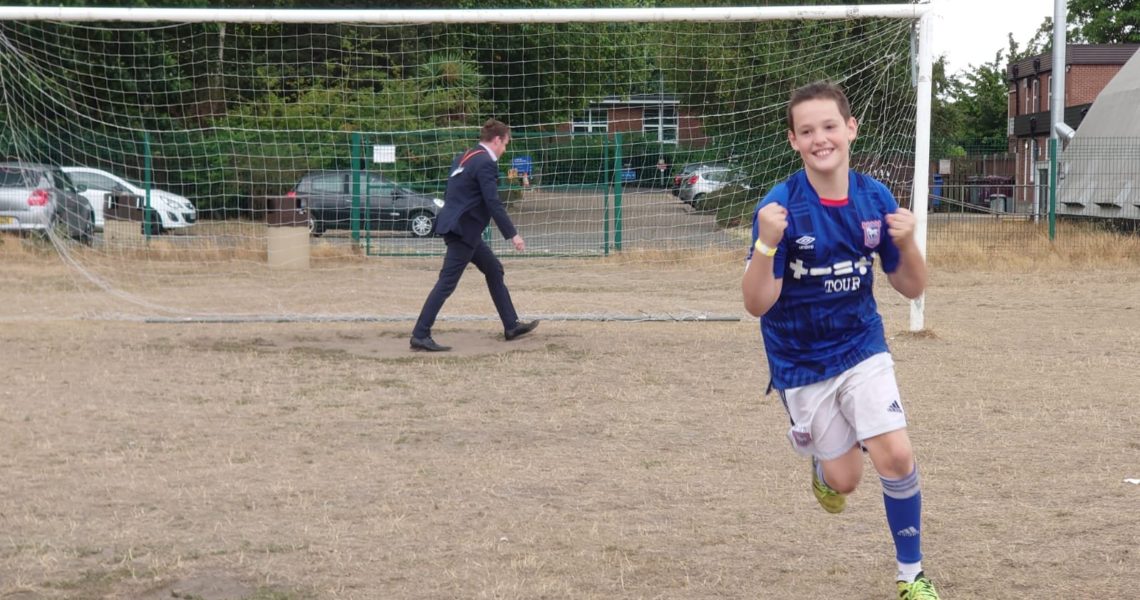 August 25, 2022 0 Comments by Chris in Education
Over the summer, lots of kids around Ipswich are attending holiday camps like Inspire Suffolk on Lindbergh Road. Inspire Suffolk’s Summer Holiday Programme has been running sport and creative activities for 250 children over the holiday for 3 years now. Today I joined in and practiced some goalkeeping in the football activity session, as well as getting involved with creating paper-plate art.
These activity sessions for 250 pupils aged 4-12 are funding by the Suffolk Holiday Activity and Food initiative, designed to ensure kids have access to activity and lunches. It’s great to see physical activity being encouraged during the holidays. We know how important it is for children to get active, and this holiday programme is a wonderful way to promote fitness and activity.
Thank you to Terry Baxter, the CEO of Inspire Suffolk, for showing me the work being done at Inspire Suffolk today.
Read More 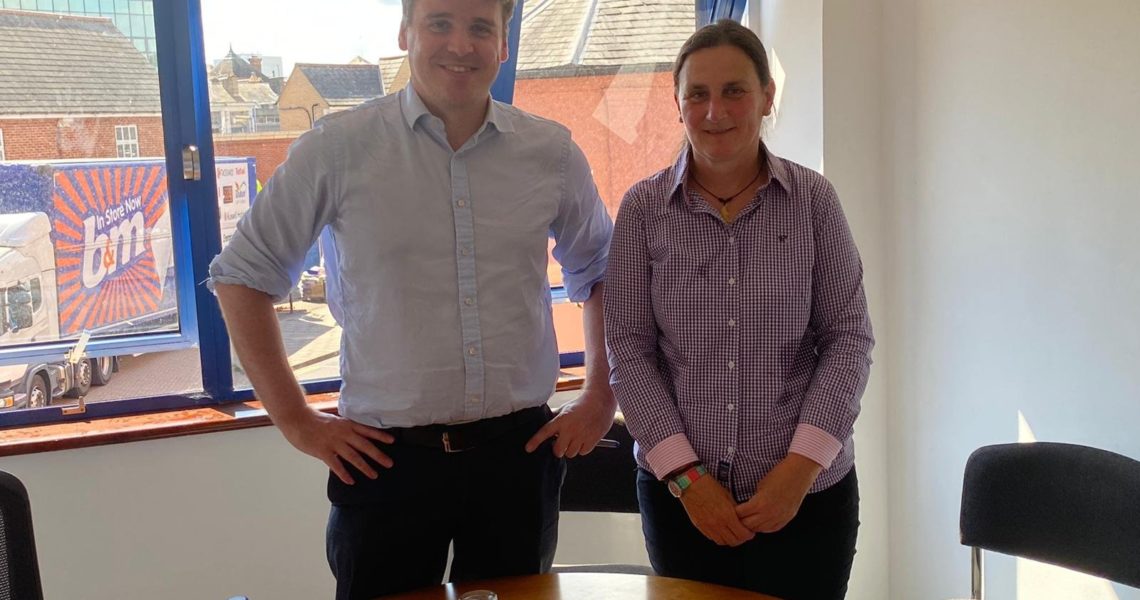 August 24, 2022 0 Comments by Chris in Education
Today I met Caroline from the NFU. Ipswich is the County Town for rural Suffolk, so we had lots to discuss from apprenticeships to the cost of fertiliser and reducing fly-tipping.
I was keen to emphasise the importance of agricultural apprenticeships. Skills, training and apprenticeships is something I am always trying to promote to ensure the best opportunities for Ipswich people. When it comes to agricultural apprenticeships, it seems that more certainty is required in the way they are run. Level 2 apprenticeships are currently available for a certain period of time, however there is nothing to replace them and this is creating some uncertainty. Many young people from Ipswich travel to rural areas of Suffolk to work in agriculture, and a number of Ipswich-based students take courses at Suffolk Rural college, which is linked to Suffolk New College, so this is an issue which affects both rural Suffolk and our County Town.
Another key issue we discussed was the increasing cost of fertiliser. Suffolk farms import fertiliser via Port of Ipswich, and fertiliser prices have shot up. This is impacting not only local farms growing British produce here in Suffolk, but also having an effect on the Port of Ipswich trade.
I had the chance to raise the issue of fly-tipping, which is prevalent around rural Suffolk. This is an issue which constituents have raised with me as something they have noticed when out and about across the county. I wanted to discuss this with Caroline and see what can be done to reduce the issue together.
Thank you to Caroline for an interesting and productive meeting.
Read More 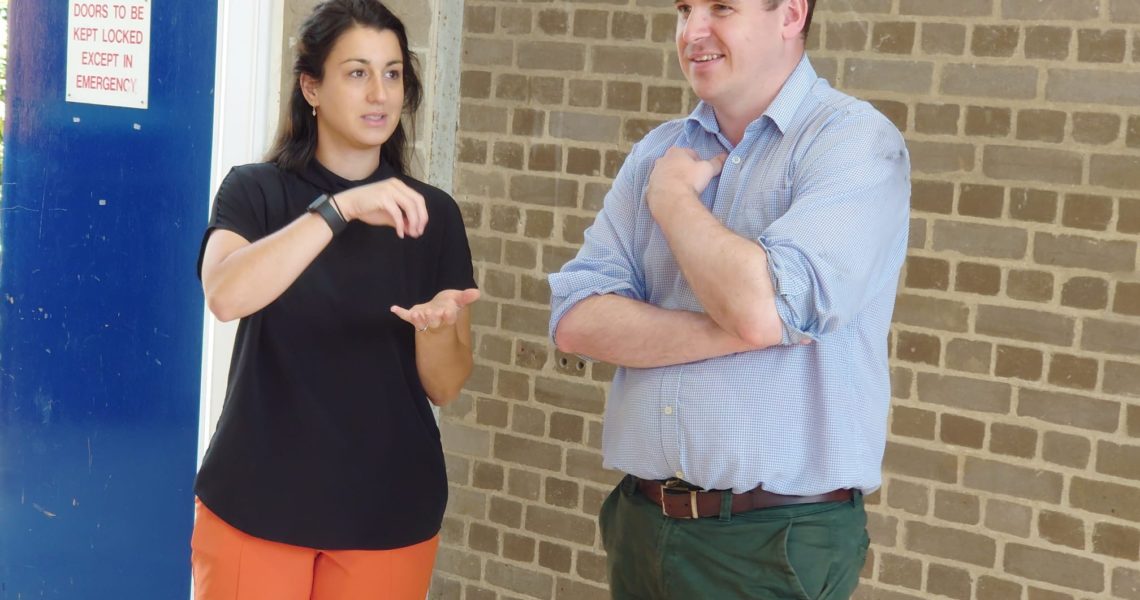 August 9, 2022 0 Comments by Chris in Education Opportunities for young people
This morning I visited the Northgate Sport Centre Summer Camp to hear more about the IBC Summer Holiday iCard activities for local Ipswich pupils. I met with the Sports and Leisure Service Manager at Ipswich Borough Council, Bella, who showed me around the camp. They have 50-60 users on a daily basis with the iCard Summer Holiday camp being offered for free to any eligible children between 5-16 years old who live between postcodes IP1-IP4.
This is a fun way for Ipswich pupils to fill their summer holidays with sporting activities such as football, gymnastics, basketball and trampolining. I was pleased to see that archery was also being offered with adjustments made for children with disabilities. Bella explained how they are working with charities to deliver sport activities, including some meant specially to support children with disabilities.
I continue to be incredibly supportive of any way to incorporate sports to all pupils, including those with special educational needs. This iCard programme incorporates both socialising with friends, with sporting activities and healthy exercise and whilst there it was clear to see how much pupils were enjoying the variety of activities.
Read More 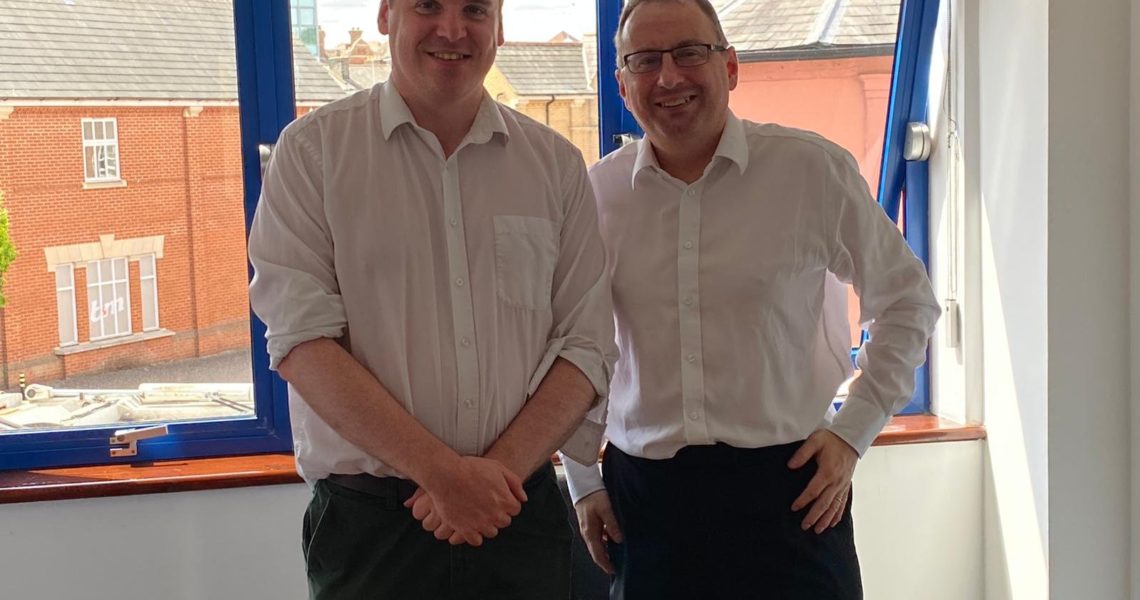 August 2, 2022 0 Comments by Chris in Local Economy
Thank you to Chris Starkie from the New Anglia LEP for a productive meeting today, where we covered everything from devolution to levelling up to apprenticeships and skills.
Chris and I agree that a level 3 deal for Suffolk, with a directly elected county council leader who is accountable, would be good for the area – bringing more power and ability to invest directly in Ipswich. There are still a lot of logistics to discuss here and technicalities to work out, but I personally think that with devolution usually comes a package of funding which would be good for the Town.
Chris and I discussed the Levelling Up funding, and the progress of the Town Deal projects. I have been writing to the Minister for Levelling Up, Housing and Communities to press forwards on these projects.
I told Chris about my views on the value of apprenticeships, and that we need to make it easier for Small and Medium Enterprises to offer apprenticeships and apply for the apprenticeship levy. Skills and apprenticeships are vital to the future of our local economy, and making this process easier for small businesses is something we need to work on.
Thank you to Chris for all the work the New Anglia LEP does for our local economy here.
Read More