January 18, 2022 0 Comments by Chris in Uncategorized
Something I have been consistently vocal on is improving the funding of our core services in Suffolk: police, education, and transport.
Ipswich is a Town I am incredibly proud of, and one with huge potential and lots to offer. However, it is also a Town with significant pockets of deprivation. Some of the best people I have ever met have been from the most deprived areas of this Town, which are in need of funding and levelling up.
Today in Westminster Hall I spoke on levelling up Ipswich and the East of England, funding for our core services, and unlocking the potential of Suffolk.
Also pleased to see that Ipswich was accepted as the oldest Town in England, with the Essex MPs present declining to challenge our claim.
Read More

I would firstly like apologise for not commenting sooner on the events of the past week. The developments have been very significant and have come very thick and fast and I’ve been reflecting on everything and reading the many emails I’ve been receiving and continue to receive from constituents. Over Friday and Saturday, I was also able to talk to a large number of constituents face to face about all these matters.

With regard to the ongoing revelations to do with the culture in Downing Street throughout the pandemic I must say that I’ve been appalled. It seems that at times Number 10 seemed to better represent a frat house than the centre of Government. The fact that a big bash was organised the night before Prince Phillip’s funeral fills me with disgust. This is not an isolated example of modest rule breaking. It’s clear to me that whatever happens there needs to be almost a total clear out of Number 10 and all of those who were in anyway connected with what appear to be clear rule breaking events need to properly held to account.

Some constituents have asked me in emails whether I attended any of these parties. The answer is NO. I’ve found out about these party revelations in the same way you all have. Via the media.

The Prime Minister was right to apologise in Parliament last Wednesday. Clearly the fact that he attended the May 2020 event however briefly was a significant error of judgement. I understand that the Prime Minister didn’t receive an invitation to what was clearly a social event, but it should have been instantly clear to him that not only should he be nowhere near such an event but that he should have broken it up immediately and ensured that all those responsible were disciplined.

I’m acutely conscious of all the sacrifices my constituents have made throughout the pandemic and how painful this has been for many. I would argue that the onus is on those who make the rules to follow them to an even greater extent than the average citizen. I experienced the anger that is provoked when this is not the case over the Barnard Castle incident and have again over this week’s developments.

As many of you will be aware Sue Gray the civil servant is currently carrying out an independent investigation into all what went out and should be publishing her findings next week. I know enough now about what happened to be very angry but in the grand scheme of things waiting few days to read the full report that will follow the investigation isn’t a long time and I’m prepared to do that.

My wish is for the Government to be fully focused on the issues that matter the most to the country and my constituents. Moving on from COVID, getting the economy firing on all cylinders, dealing with the NHS backlog, cost of living, immigration, law and order etc. To say that all events of the past few weeks has been an unwelcome distraction would be an understatement.

I will comment further in due course and everyone who has emailed me will be getting a response which closely resembles this statement (for obvious reasons).

January 14, 2022 0 Comments by Chris in Crime
Anti-social behaviour in our town is something I’ve received numerous letters from constituents about.
It is clear to me that anti-social behaviour has a significant impact on the town, whether constituents feel safe and comfortable while out and about, and how likely people are to spend time in the town centre. I feel that police need more direct powers to disperse the groups of certain individuals who are making others uncomfortable, making inappropriate comments, and engaging in acts of anti-social behaviour.
In the Westminster Hall debate this week, I made it clear that we should not tolerate anti-social behaviour. I also advocated for fairer police funding for Suffolk, and welcome the review into the funding formula, as well as giving police the powers they need.
Read More 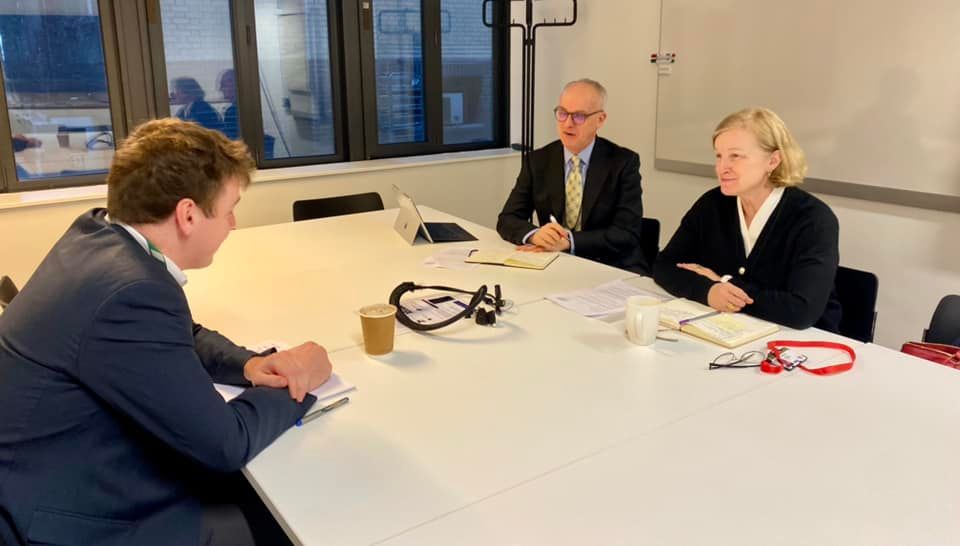 Meeting with Chief Inspector of Education

January 13, 2022 0 Comments by Chris in Education
This afternoon I held a direct meeting with the Chief Inspector of Education, Amanda Spielman, and the National Director (education), Chris Russell.
I wanted to talk about the Ofsted framework, and incentivising good provision of SEND. From being in contact with schools and headteachers, I’ve unfortunately heard quite a few negative reports about how the Ofsted reports framework have reflected on the work schools do for SEND.
However, I was pleased to hear reassurance in the meeting this afternoon, which highlighted the differences in the new framework, introduced in September 2019. Due to the pandemic, only about 20% of schools have yet been judged under the new system, however I am encouraged that this new framework steps away from results tables and towards judging the ‘positive difference’ made to students – this is particularly important for SEND pupils.
It was explained in our meeting that a school with a low SEND intake but high attainment in exams might not perform as well in Ofsted reports as a school which has a higher number of SEND students, for whom it makes a significant and positive difference, despite seemingly lower outcomes in a league table. What really matters is the positive difference made to the students and I am pleased to see that reflected in Ofsted thinking. I’m encouraged that once the new framework beds in properly, improvements will follow.
Read More

Today in the Education Committee we heard about the government’s catch-up programme. It is absolutely right that this programme has a particular focus on disadvantaged pupils, who have disproportionately suffered as a result of the pandemic.

I raised the question of how this programme is built to provide for students with special educational needs and disabilities. The data clearly shows that those from deprived backgrounds have been badly affected by lost learning throughout the pandemic, but it is essential that the catch-up programme includes those disadvantaged due to disability and learning differences.

I was pleased to hear that over half the providers of the tutoring programme have the capability to support SEND students, as well as a cohort of specialists. You can watch my question on the government catch up programme below.