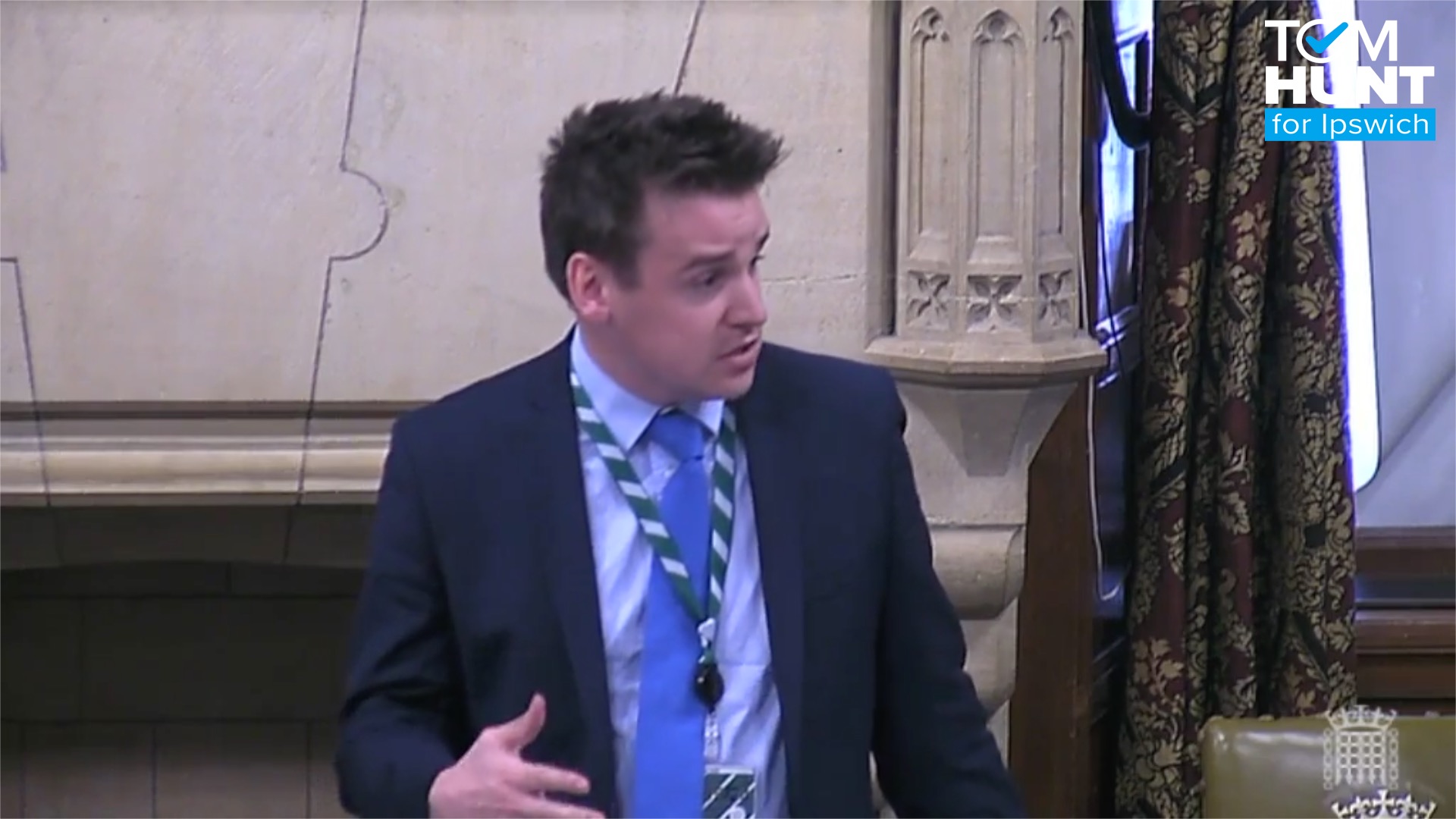 Today (12/02/2020) Tom Hunt, MP for Ipswich, gave a speech in the Westminster Hall debate on leaseholders and cladding following numerous calls for help from residents of St Francis Tower in Ipswich. He pledged to fight like a lion to get the Government to step in and save leaseholders from the prospect of costs of over £20,000 each for cladding replacement and fire safety works.

The issues around cladding at St Francis Tower was raised in one of Tom’s first surgeries with constituents as a newly elected MP. In that meeting and since, residents of the Tower have been in contact with him, detailing the great frustration and uncertainty they are still experiencing since the Grenfell tragedy in 2017 set off alarm bells about St Francis Tower’s cladding.

Tom plainly set out the issues which have made residents feel “trapped” to the Government in his speech. In respect to the huge costs faced by leaseholders to make the block safe, Tom made it clear that it must be the freeholders who did the dangerous refurbishment, not the leaseholders, who must take responsibility for the cost. While the freeholders are chased, the Government should expand its £200 million scheme for the removal of ACM cladding (the type on Grenfell tower) to include the just as dangerous ACM cladding which was on St Francis Tower. Tom said: “There is absolutely no logical reason why [residents of St Francis Tower] should be treated in any different way to those who live in properties where the cladding is ACM.” This is a crucial point of fairness for residents of St Francis Tower.

Tom also stressed the poor communication from Block Management, the company managing the building, to his constituents who live there. Hunt said Block Management’s communication has almost served to inflame residents’ anxieties and tensions rather than soothe them. This has compounded their ordeal.

Hunt conveyed the distress this ongoing issue has caused the residents of St Francis Tower. He told Westminster Hall how leaseholders had seen the price of their properties collapse and how the bill they are being told to pay is about a third of the cost of the properties themselves. Tom has heard from constituents who have savings and investments tied up in the flats and who are now unable to move home, get a return on their investment, or cash in their savings. Many of them are stuck, not just financially but also emotionally.

“Over 100 of my constituents live in St Francis Tower and they have had this issue hanging over their head for far too long. It’s clearly a process which has been emotionally and financially draining for them and that’s why I called on the Government today to step in. Money should be made available for the replacement of cladding of the type found on St Francis Tower on the same basis that money is available to replace the type of cladding that was on Grenfell Tower – especially given it’s just as dangerous.”

“This is what needs to happen in the short-term to provide residents with some much needed certainty but in the long-term I encourage the Government to track down the freeholders responsible for the dangerous refurbishments to recoup the cost. These are the people who were supposed to have knowledge of the issue and who should have obeyed the regulations at the time – not the leaseholders. It’s unjustifiable that it is now on leaseholders to pay the huge costs caused by this catalogue of errors which is entirely not their fault.

“I will continue my close contact with St Francis Tower residents and will not stop raising this issue with Government. I stand by them in demanding clearer communication from Block Management and resolving a situation where one of their most valuable assets is completely frozen.”