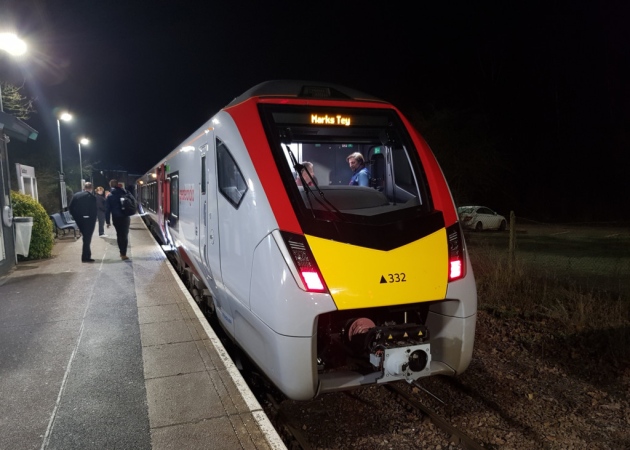 Greater Anglia bosses were told they had not prepared enough before December’s train crisis during a meeting with East Anglian MPs in Westminster.

The meeting was called by Ipswich MP Tom Hunt who was angered about the widespread cancellations on rural and cross-country routes after signalling problems in Norfolk.

He was particularly concerned about the suspension of the cross-country service between Ipswich and Peterborough for several weeks over Christmas as people were trying to use it to visit family and friends over the festive season.

Mr Hunt said: “A lot of what they said was quite technical and we weren’t really in a position to dig too deeply into that. But Greater Anglia said their major issue was that after the incident in Norfolk (when a train nearly hit a vehicle on a level crossing after signalling problems) there was a delay in training drivers on the new trains.

“I said that was not good enough – they’d been testing the new trains all year. Why hadn’t they trained enough drivers before they put them into service? They should have been better prepared.” He said the MPs accepted that the weather conditions and signalling problems meant there would have been some difficulties – but felt the lack of drivers should have been avoided.

Jonathan Denby, Greater Anglia’s head of corporate affairs, was at the meeting and said he told the MPs he did not feel the training of drivers was the underlying cause of the problems.

He said: “There are two issues: the signalling problem which was totally different to what we had seen in the past and some software issues on the new trains which we are working through.

“There was no problem with the training until we had the signalling issue which forced us to change the way the trains were run.

“We are still working on the software issues but things are improving, we’re getting new trains in and we hope things should really have settled down within a month to six weeks.”

He said 37 of the 38 regional trains had now arrived in East Anglia and about 30 of them were now passed for passenger service.

hile there have been some problems this week, generally services have been better than last – and it was significant that the new trains are now running on all the lines they were designed for.

Ellie Burrows, Network Rail’s route managing director, Anglia: “I understand how frustrating this disruption has been for passengers, and I’m very sorry to all who have been affected. We have commissioned a detailed technical investigation into the root causes of the issue and we continue to work with Greater Anglia to help them fully restore services on all the regional routes.”

Following the meeting Mr Hunt added: “The rail disruption over the Christmas period and into the new year has been unacceptable and I have received lots of correspondence from constituents about this issue. I know how frustrating all the delays and cancellations are to people looking to go about their business or to see their family over the festive season. During today’s meeting, I was pleased to be able to raise many constituents’ concerns with Network Rail and Greater Anglia.

“In addition to the cancellations on the East Suffolk Line, the Ipswich to Peterborough line has been a particular concern with many passengers learning their trains have been cancelled while waiting at the platform.

“I appreciate that Network Rail and Greater Anglia were able to provide a significant amount of technical detail regarding how initial signal failures had knock-on effects on the introduction of new trains and the training of drivers to drive them.

“I do, however, maintain the view that a little more common sense could have been used to prevent these problems spiralling out of control in the first place, particularly when it comes to introducing new trains in the more difficult winter months.

“As well as the particularly disruptive period recently, today’s meeting also presented an opportunity to raise other rail issues of importance to Ipswich. These include the frequent interruption of regular services between Ipswich and London on Sundays due to work on the mainline, leaving many passengers faced with the prospect of long replacement bus service journeys.

“I also underlined that overcrowding is a big problem, and one which I have experienced first-hand. This is not a comfortable or productive way to travel for passengers who often have to pay over the odds to travel.

“Finally, I am glad that there was broad consensus in the room to work together to lobby for more funding for East Anglia. As I have said many times before, our region has been historically underfunded and we need additional investment if we are serious about levelling up the whole country.”

Dr Coffey MP added: “I welcomed the opportunity to join with other MPs and challenge Greater Anglia and Network Rail about the travel chaos on our local trains. I and my constituents have been caught up in this, with people unable to get to work and children unable to get to school.

“Suffolk Coastal constituents deserve better and I will keep pressing on this issue until there are significant improvements.”