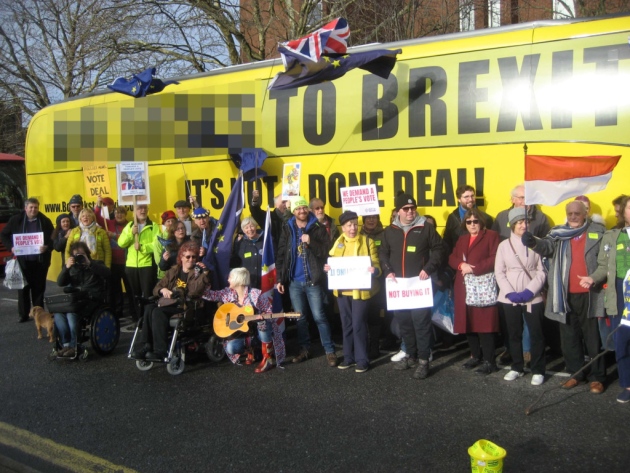 Just saw that yesterday a yellow bus with the slogan “B******* to Brexit” painted all over it paid a visit to Ipswich along with a number of activists calling for either a second referendum or for Brexit to be cancelled. Of course its a free country and they are free to express themselves in any way they wish, however I do think it takes a certain brass neck to visit a Town where almost 40,000 people voted to leave the EU with a bus covered with such a message. Perhaps more appropriate for them to cover the bus with the message, “B******* to the 58.3%” or “B******* to what you voted for”.

Its hardly surprising that the activists interviewed by the Ipswich Star described the reaction as “mixed”. As it happens, I voted and campaigned for our country to leave the EU. However, my strong opposition to any notion of their being a second referendum isn’t about my desire for Britain to leave the EU, its about democracy. In Ipswich 58.3% of people voted to leave the EU and its vital that this is fully respected and that we leave the EU on 29 March. As the Conservative Prospective Parliamentary candidate for Ipswich I want to make it crystal clear that not under any circumstances would I consider supporting a second referendum that included remain as an option. I think to do so would be to treat both the national verdict the local verdict in Ipswich with contempt. The question was asked in June 2016, we now need to get on and implement it. I very much hope that Sandy Martin the Labour MP for Ipswich is able to make a clear statement on the matter also and to put pressure on the Labour leadership who appear to be increasingly flirting with the idea of publicly supporting a second referendum to respect the referendum result and dismiss the idea of having a second referendum with a remain option.