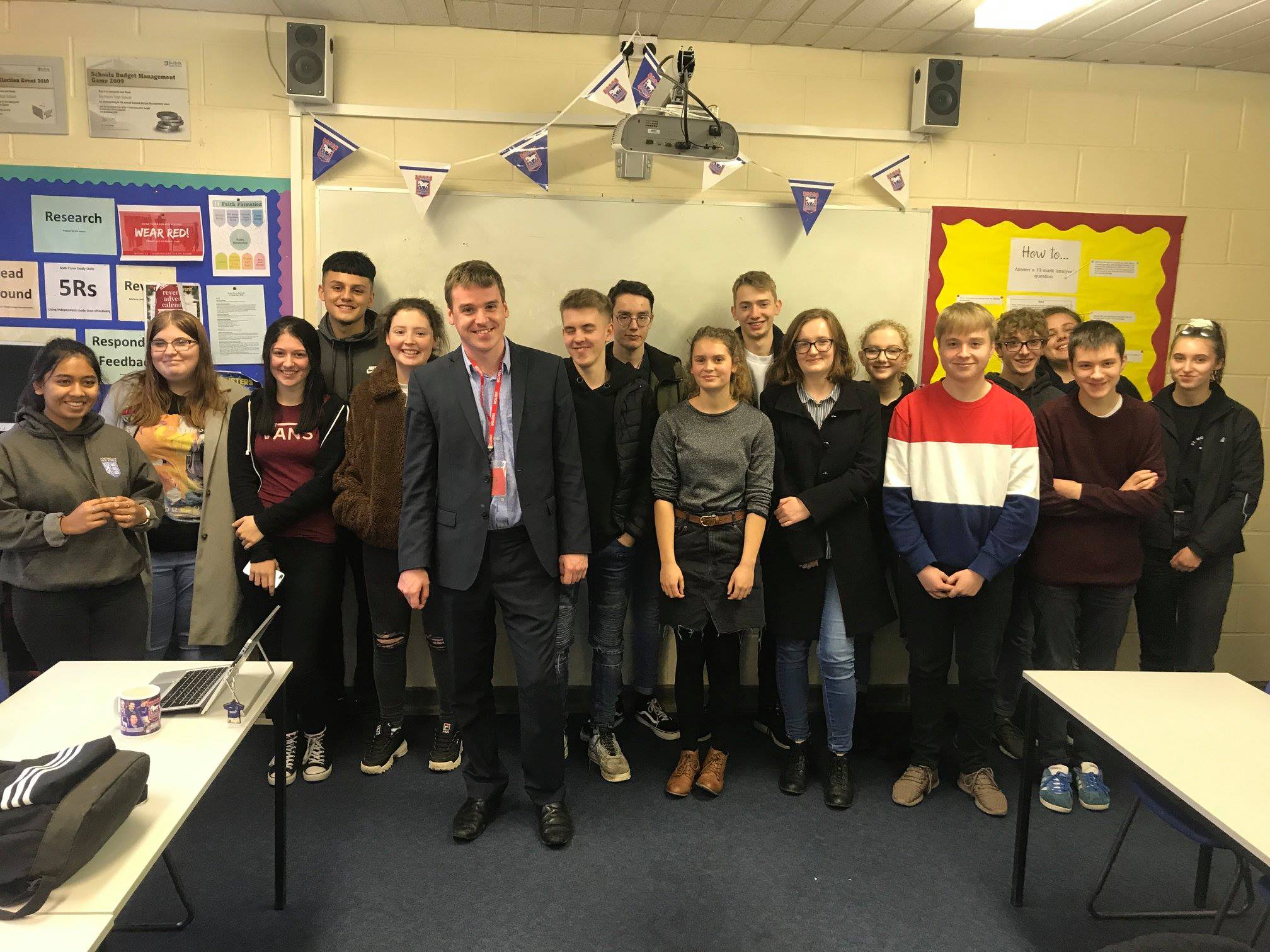 December 16, 2018 0 Comments by Chris in Campaign Opportunities for young people

The last four weeks for me have had a strong focus on education. All in all I’ve visited five secondary schools, meeting with the head teacher at each. These meetings have been extremely useful and have given me a real insight into the challenges there are within our schools.

During my meetings a number of themes have emerged that I plan to raise with the appropriate people and Government organisations over the comings months. Teacher recruitment and retention seems to be an issue at many of our schools. Yes this is a national problem also but there do seem to be some factors specific to Ipswich that need to be addressed. It’s important that being a teacher in Ipswich schools is as attractive as possible. Great teachers should be attracted to come to Ipswich and its about finding a way of making teaching in Ipswich schools as appealing as possible. It’s not good that many of our Head’s are constantly worried about losing some of their best teachers.

Last year it was announced that Ipswich would be an Education Opportunity Area. In short this is bringing millions of pounds of extra Government money into schools in Ipswich. This needs to be welcomed. I’ve been very interested to learn about some of the ways this extra money has been spent. Some excellent initiatives have been launched in Ipswich schools as a result of the Government making Ipswich and Education Opportunity Area. However, concerns were also raised about the strings attached with accessing the funding. My view is that we need to trust our teachers to get on with the job of investing the extra money in initiatives they know will work for their school. Yes there needs to be sound process but we need to minimize the bureaucratic burden placed upon teachers who are already under a significant amount of pressure.

Unsurprisingly, each of the head teachers also raised concerns about county lines. It’s sickening that many young vulnerable people in Ipswich can become the victim to this. The only way that we can hope to tackle this is by working together. Multi agency. Close working and strong relationships between school leaders and the police is an absolute must. The pastoral support provided by schools in many cases appears to be very strong. However, its important that teachers should be able to focus fully on the teaching. The pressure on teachers in our schools is significant and their roles more diverse than many seem to realise.

In summary then there is much to be positive about. We have some great teachers and in general all the schools I’ve visited appear to be heading in the right direction and improving. However they face many challenges. Funding, teacher recruitment and retention, county lines being three that immediately spring to mind. Our secondary schools vary as do their intakes and some of the challenges they face are therefore different. My initial view is that Suffolk schools need fairer funding from central Government, there needs to be more initiatives and thought given to make teaching in Ipswich schools as attractive as possible (financial incentives may need to be considered), and there needs to be strong and close working relationships between the schools and the police when it comes to county lines and other anti-social behaviour problems. Ideally there needs to be one person within the police who is responsible for liaison with a particular school. Its important that senior teachers are able to develop close relationships based on trust with the local police.

The Education Opportunity Area for Ipswich will last for three years and we’re one year in. The funding is very welcome but at its best the initiative could be transformational for Ipswich schools. It’s important that one year in the concerns teachers have raised associated with the bidding process are addressed. We need to ensure that the initiative is a game changer for schools in Ipswich and a real catalyst for the future. The opportunity should not be missed.

I have almost finished my tour of secondary schools within Ipswich at which point I will start visiting some of our primary schools. This Friday I will also be meeting with the Vice-Chancellor of the University of Suffolk.