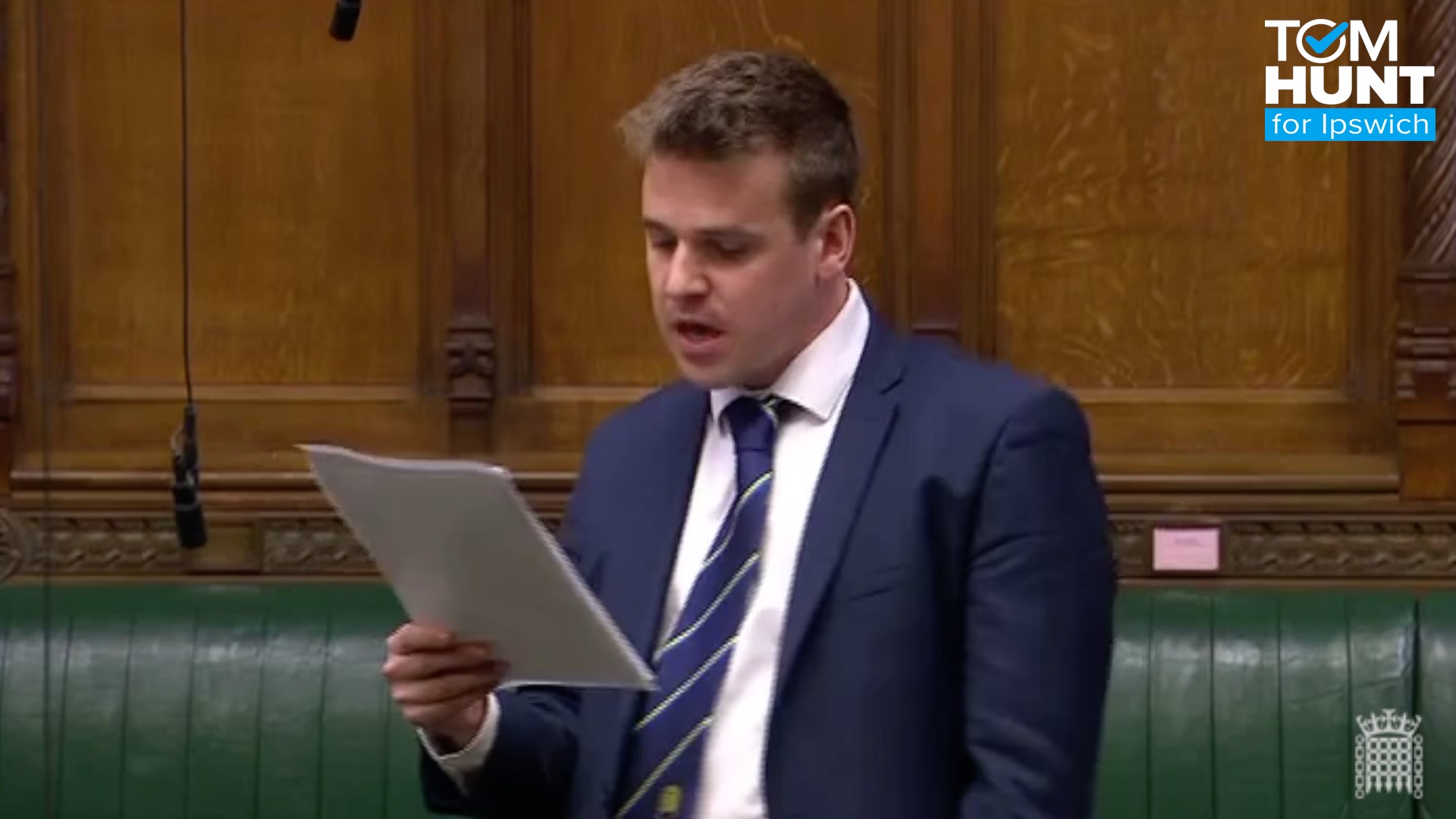 Yesterday (09/03/20), Tom Hunt, Member of Parliament for Ipswich, spoke passionately in Parliament during the debate a general debate on ‘The Commonwealth in 2020’.

Hunt was quick to call out the Labour Front Bench which used the debate on the Commonwealth in 2020 to raise the negative aspects of the British Empire. Hunt was clear that the Commonwealth today was not a legacy of empire but a voluntary community of equal states working together for their common interest.

This community stands in stark contrast to the “outdated and undemocratic model” of the European Union which seeks the power to coerce Member States, and which former EU Commission President, Jose Manuel Barroso, likened to the creation of a new ‘empire’. This is of course an organisation which the vast majority of Labour MPs voted against leaving.

Hunt identified the Labour Party’s “incessant need to prioritise apologising for our country” as a key reason for the breakdown in their support among patriotic voters.

Hunt was keen to move the debate towards the future and the rekindling of the UK’s long-neglected relationship with its Commonwealth partners. And he highlighted that increased trade should be at the heart of the UK’s efforts to re-engage.

Free from the protectionist EU bloc which restricted our ability to trade with our historic partners, the UK can now play a full role in the Commonwealth’s target of boosting intra-Commonwealth trade to £1.5 trillion by 2030. This means striking the trade deals which the EU often failed to get over the line, including with India.

Hunt highlighted that the Commonwealth includes some of the world’s fastest growing economies, and with 60% of the Commonwealth’s 2.4 billion population under the age of 30, he said the opportunities for mutually beneficial trade are “enormous”. Especially given the fact we already share the legal, linguistic and cultural norms which make the foundations of good agreements.

Hunt acknowledged that these shared bonds don’t just exist between the countries of the Commonwealth but they live in the hearts of the peoples of the Commonwealth too. On this note, he told the House of the great contributions of Commonwealth-origin people to life in Ipswich. He paid tribute to the dedication of Ipswich’s Indian community who fill many of the roles our local NHS, as well as the Bangladeshi Community which is home to some of the town’s most successful entrepreneurs and the Bangladeshi Support Centre which helps vulnerable people of over 50 different nationalities.

Hunt pointed out that the relationships between Commonwealth citizens, including those in Ipswich, is often best captured by our shared love of cricket. Wearing his All-Party Parliamentary Cricket Group tie, Hunt called for a big screen in Ipswich town centre to show the next cricket World Cup. He said: “We need to embrace the festival of cricket to a far greater extent than we have in the past.”

Cricket was however not the only sport raised however, with DUP MP Jim Shannon intervening in Hunt’s speech to quiz him about Ipswich Town’s recent form in the third division. Hunt agreed with Shannon, whose eldest son supports Ipswich Town, that recent performances have indeed been disappointing and that Town’s fortunes seem to be taking a turn for the worse after Tom saw them beat Lincoln four weeks ago.

Coming back in his speech to the fraternal bonds which unite the peoples of the Commonwealth, Hunt urged the Government to waive fees for Commonwealth personnel who have served in the UK’s armed forces. At present, there are over 4,700 Commonwealth servicemen and women serving in all three branches of our military. But after serving at least four years, those of them which wish to apply for Indefinite Leave to Remain here are faced with charges of £2,389 per person. That means if they are part of a family of four, they face costs of over £9,500 just to stay in the country they’ve served.

Acknowledging “those who sacrifice so much for our country”, Hunt called on the Government to drop the exorbitant costs, saying “If anybody should not be considered a foreigner in our country, it is them”.

“Our exit from the European Union gives a historic opportunity to make up for lost time in the Commonwealth. As part of the EU, we were trying to create artificially in Europe much of what already exists between Commonwealth nations, such as our shared history, language, culture, legal system and much else.

“While I don’t think these bonds have been forgotten by the people of the Commonwealth, the importance of them has not been reflected on the nation state level as we’ve been tied into the EU.

“That’s why I set out in the Chamber a positive vision for how we can re-engage with our Commonwealth partners. And this has to start with trade. India for example is growing at around 7% a year but the EU has failed to reach a trade agreement with India since talks started as far back as 2007. Building the deals with countries like India which the EU couldn’t has to be our ambition if we are going to deliver on the opportunities Brexit has presented.

“These deals should of course be grounded in the bonds shared between the people of the Commonwealth. And I told the House how these bonds are lived every day in Ipswich. We benefit greatly from many Commonwealth citizens and Commonwealth-origin Brits who have made Ipswich their home. Their contributions to both our local economy and the wellbeing of others are invaluable.

“It’s high time that we put the human aspects of the Commonwealth at the heart of policy and a new post-Brexit immigration system will be an important part of that. We must send a clear signal to Commonwealth citizens around the world that we will not go on prioritising immigration from certain countries arbitrarily and everyone should be given an equal chance to come here.

“If we are to make exceptions in our immigration rules, then it should be for the Commonwealth troops who come to serve in our military. Often leaving their families far away, these Commonwealth personnel put themselves in harm’s way to fill the shortages in our forces. Given their sacrifice, it’s entirely unreasonable that they should face costs as high as £9,500 if they want to settle here with their family after serving at least four years on our behalf. I urged the Government to waive these exorbitant fees in spirit that Commonwealth people should not be considered foreign to one another.”